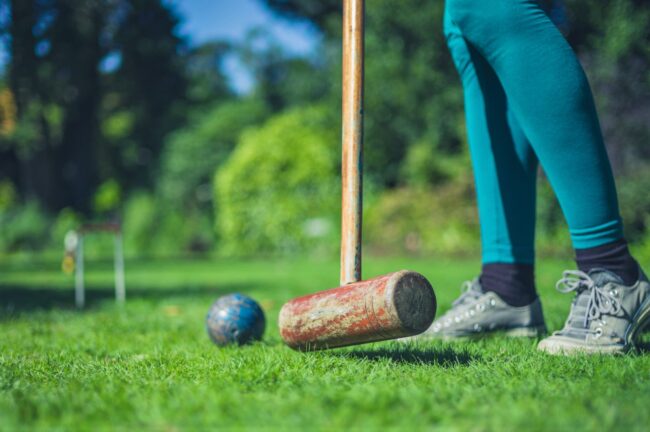 Once we reach 60, we’ve heard all the common claims about keeping fit.  There’s “no pain, no gain” (not true); “feel the burn” (not necessary); “all progress happens outside the comfort zone” (not true); “train hard, goodbye lard” (what?); “sweat is your fat crying” (good heavens).  However, the one that is true and extremely relevant to women our age is the often repeated “move it or lose it”.  The less we move, the harder it becomes to move. What would you say to five easy lawn games that can help women over 60 keep fit and have fun at the same time?

Why do women over 60 dislike exercise?

The most commonly cited reason for not exercising—or for abandoning an existing exercise program—is boredom or lack of enjoyment. So what if going to a gym is simply not your thing?  What if aimless walking is simply too boring for you?  What if all the typical exercises hold little interest for you?  If you don’t enjoy your exercise, chances are you will not continue with it; you lose motivation because exercise becomes a chore.

But what if you could find a physical activity that you could enjoy in your own backyard—one that you hadn’t previously considered?  What if you could invite your friends and make a regular gathering out of a get-together in the garden with lawn games being the focal point?

You may have overlooked these five activities that are ideal for fun backyard get-togethers and fulfill the primary goal: to keep you moving.

Let’s take a look at some of them:

Badminton is the queen of the backyard exercise.  You can burn nearly 500 calories in a badminton game of 60 minutes.  However, calorie burning is not the objective here.  You will constantly be moving, your joints will be working and your concentration will be focused (a great factor in helping you sleep).

Not only is badminton a great exercise but what you’ll need to play it is light weight and inexpensive.  You’ll work up to friendly competition with your friends and may even want to start a badminton league.

The Franklin Sports Badminton Set is affordable and well reviewed on Amazon.  Make sure your set includes four racquets; many of the more expensive sets on Amazon offer only two but other accessories which you won’t need, like a padded racquet bag.  You can always buy more shuttlecocks if you need them as well as additional racquets. Find badminton sets on Amazon.

If your only impression of croquet is pictures of women from the 1920s in long skirts and puffed-sleeved blouses swinging mallets, it’s time to get into the 21st century.  Croquet is having a moment (perhaps in part because of the riotous game on Bridgerton).

Obviously outdoor exercise is good for you but beyond that, the United States Croquet Association estimates that players walk more than two miles during an average game.  In addition, croquet combines the intellectual puzzle-solving of a game like chess with an element of physical activity in which skills such as precision and careful touch are needed to be successful.  Croquet is simple in format but thoroughly challenging and tactical. It is played by two, four or six players.

Bean bag tossing (also known as Corn Hole) is excellent for hand eye coordination and range of motion exercise for the shoulders and arms. Good balance is also key as you need to be poised and focused when you take your aim. This lawn game is similar to horseshoes. Rather than metal horseshoes, however, this game uses soft bean bags. It is played with either two players or four players. For a singles game, players stand at the same board and throw to the opposite board. For a doubles game, one player from each team stands at each board and they throw back and forth. The scoring is simple and it is a game that is a lot of fun played in teams.

EastPoint Sports Go! Gater Corn Hole Outdoor Game is affordable and highly reviewed. The two boards snap together and fold up and the bags fit in compartments inside.  This set is easy to store and easy to transport. You can find bean bag and corn hole sets on Amazon.

Bocce can be traced back to 5200 B.C. — ancient Egyptian artwork depicts boys playing something that resembles the game. It was developed in Italy into its current form and is now played around Europe and the Adriatic region.

Players determine who throws the pallino (the small ball) with a coin toss.  Then each team throws the larger balls at the pallino. Teams earn points when their balls are closest to the pallina.  Like Corn Hole, hand eye coordination is needed as well good balance.  In addition, because Bocce balls are heavy, you can get some serious bicep, tricep and shoulder cap exercise from throwing the ball.

Rally & Roar Bocce Ball Set Classic includes eight balls, a pallino, and carrying case.  It also contains a measuring tape so that you can definitely determine the winner before you come to blows in a backyard brawl. Get your booce ball set on amazon.com

Kadima is a fun game played at the beach and in backyards.  It is called matkot in Israel but is known as Kadima in North America.  It is so popular in Israel that it is taken very seriously.  The first Israeli matkot competition was held in 2000, capped by a national championship in Tel Aviv.

The goal of the game is to hit a small rubber ball with a wooden racket as many times as possible without dropping it. Two or more players hit the ball back and forth using paddles.  The game couldn’t be simpler but it is great fun and terrific exercise since it requires reaching for the ball and moving swiftly for short distances.

You will be surprised at how much exercise you get in a very short time.  Since your focus is on keeping the ball in play and not on your exertion, you will be pleasantly surprised at how the time will pass. There is no net and no court.

ProKadima Beach Paddles Set is affordable and well-reviewed.  If you are going to be playing teams, purchase at least two of these sets so you have four racquets.  This Kadima set is wooden with plastic handles. Add a Kadima set to your cart on Amazon.com

As an Amazon affiliate Blue Hare receives a commission on purchases made through qualifying links on this page.