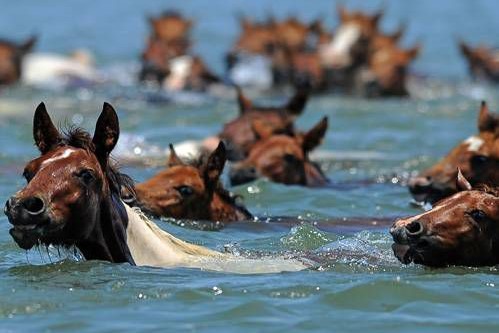 As we get older, it becomes much more difficult to be awestruck, captivated, mesmerized. One way to overcome this feeling of having “seen it all” is to spend time in the great outdoors, marveling at Mother Nature’s creations. Five of her wonders of nature are on our bucket list—dessert blooms, rippling hills of fire, visual symphony of fireflies, aquatic pony roundup, billions of twinkling stars. The experience is otherworldly, bordering on the spiritual.

For a few short weeks in July and August, the Sonoran desert, which covers large parts of the Southwestern United States and Northwestern Mexico, bursts into bloom. The blooms are truly spectacular and unique. Proof is in the many photographers and painters who descend upon Tucson each year to capture this show of color.

Credit for this annual phenomenon goes to the yearly monsoons. They bring rain with a vengeance, literally a deluge. The storms produce dramatic lightning bolts that illuminate the sky. The desert is soaked, the sun shines, and the blooms begin. And these are not just your garden variety blooms.

They are creations worthy of the most exotic flower show in the world. They are jaw-dropping, awe inspiring, and legendary.

One cactus in particular is a strange and wonderful freak of nature. Called the echinopsis cactus, the flowers bloom overnight and are at their peak beauty for a brief hour or two at most. There are 128 species of this South American native, known for its bold and brilliant blooms.

This beautiful video, Desert Rain: Monsoons of the Sonoran Desert will give you a real sense of what you can expect.

Once you arrive, one of the best places to start your foray into the desert is the Arizona-Sonora Desert Museum located just outside Tucson. This museum probably is like no other you have experienced. Part of the museum is enclosed—and another two miles of museum outside its walls that stretch right into the desert. In fact, the area is so big the museum rents scooters to make it easier to get around. This said, the best way to experience the true beauty of the desert flora is by taking a leisurely walk on foot.

Check out ‘This is Tucson’ to learn more about the Sonoran desert during monsoon season.

Be mesmerized by a prescribed burn in the Flint Hills

Witnessing a prescribed burn in the Flint Hills is another unusual “must see” experience. As one spectator extolled, “If you ever get the opportunity to witness a prescribed burn, be aware the experience can be hypnotic. There’s an intense rainbow of flaming colors, you hear sounds of fire rippling through the dead brush and you can see the concerted teamwork of burn attendees as they carefully coordinate the delicate matter of setting hundreds of acres on fire. It’s quite breathtaking.”

But what is a “prescribed burn”? It’s the process of intentionally setting the grasslands on fire in a controlled manner. Prescribed burns were first practiced by Native Americans who used controlled burns to attract bison herds for hunting. They would burn the prairie in the early spring. This encouraged new grass to grow, which attracted the bison to graze. Today ranchers and farmers use prescribed burns to restore prairie lands, rejuvenate growth, and ensure long-term survival.

This practice centers in the Flint Hills, historically known as Bluestem Pastures or Blue Stem Hills. This region in eastern Kansas and north-central Oklahoma got its name from the abundant residual flint that eroded from the bedrock. The number of visitors coming to the annual prescribed burns has grown over the years.

To find out more about this year’s events, visit the KS Emporia Convention and Visitors Bureau or call 1-800-279-3730. And since you’ll be in Kansas, how about trying some of the state’s famous BBQ? BBQ joints are everywhere but one of them, Joe’s Kansas City Barbecue, is mentioned again and again. Check here for locations.

Touch the sky at a Star Party

What is a dark park? It’s a special designation for parks that are undisturbed by air and light pollution (from streetlights, car lights, cities) and have an exceptional or distinguished quality of starry nights.

Upwards of one-third of the world’s population can’t see the Milky Way. Why? Because they live in areas that are densely populated and throw off too much light. So viewing the sky “naked” is a truly wondrous experience. Imagine seeing the Milky Way, Saturn, galaxies, star clusters, nebulae, and even the aurora borealis in totally dark surroundings.

There are numerous dark sky parks in the US. Waterton-Glacier International Dark Sky Park enjoys highest altitude, making it closest to the stars. It straddles the border between Glacier National Park in northwestern Montana and Waterton Lakes National Park in Canada. Home to some of the darkest skies in the world, it was named the world’s first transboundary international dark sky park.

On three Friday nights in the summer the Big Sky Astronomy Club, in conjunction with the park, holds Star Parties—complete with astronomers and telescopes—at the Logan Pass Visitors’ Center at the summit of Going-To-The-Sun-Road. Tickets are required and are available on the day before each event at the St. Mary’s or Apgar Visitor Centers. The park strongly advises getting tickets before the day of the party because they usually are gone by the morning of the event. Contact Park Headquarters at (406-888-7800) for more information.

Dance in the dark at the Pennsylvania Firefly Festival

Did you know that fireflies communicate with light? Or that they are the most efficient lights in the world with 100% of their energy emitted as light? If we’ve sparked your interest, and you want to learn more, Pennsylvania’s Allegheny National Forest is where you want to be in June.

Firefly season across the half-million-acre Forest usually starts around the first day of summer and lasts for several weeks into mid-July. The Pennsylvania Firefly Festival, held nearby, celebrates the annual mating displays of over 15 different species of fireflies, including the Synchronous firefly.

This rare species, the P. Carolinus, emits its flashes in a synchronous pattern: thousands of fireflies lighting up at precisely the same time, over and over, from dusk to dark. Until recently it was found in just two places in the world: Southeast Asia and the Great Smoky Mountains National Park in the U.S. But in 2012 it was discovered in the Allegheny National Forest.

Now, thanks to the annual Pennsylvania Firefly Festival, you can step into this magical light show. The best place for firefly viewing is the Black Caddis Ranch in Kelletville, PA. It hosts the Festival on the fourth Saturday in June, welcoming visitors from around the globe. Parking is $5 per car, wristbands for the guided firefly walks are $5 per person. The Festival website has more information and a link to area accommodations for overnight visitors.

Where can you see more than 100 wild ponies swimming? At the Chincoteague Wild Pony Swim & Auction, held on the last consecutive Wednesday and Thursday of July (swim on Wednesday, auction on Thursday).

Wild ponies have inhabited Assateague Island for hundreds of years. A fence along the Virginia/Maryland State line separates Assateague Island’s ponies into two herds. The National Park Service owns the herd in Maryland. The Chincoteague Volunteer Fire Company owns the one in Virginia.

The Fire Company controls the herd size with a pony auction. Each year tens of thousands of spectators come to watch the Saltwater Cowboys swim the pony herd from Assateague Island to Chincoteague Island. During the brief three-minute swim, about 150 wild horses make their way across the Assateague Channel. Their swim is timed for when the tide is “slack calm.” This protects the young ponies, born in spring or early summer, from strong currents. Get a sense of this exceptional event by viewing this short video from National Geographic.

The best way to witness the Chincoteague Pony Swim is via the Assateague Explorer tour boat. It is equipped with a restroom and plenty of shade. Seats on the boat are limited for the special Pony Swim event. This boat is like getting a ticket to the Super Bowl on the 50-yard line. Your alternative is to stand in the sun with 40,000 other hopefuls—no restrooms nearby because it’s a salt marsh.

Chincoteague.com features everything you need to know about the pony swim. (Please note: there is a typo in the title, “Official 2018 Chincoteague Island Pony Swim Guide.” The year should be 2019 since events for 2019 are all listed below the title.)

• Starry nights, wild horses. America’s national parks are good for heart and soul. And wallet.
• The right sunscreen can save your life. Here’s why…
• Walking in England: 7 country walks near London (kilts not required)