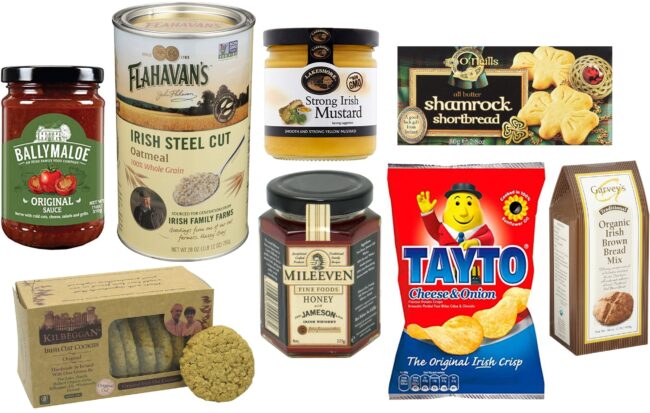 Every country has its peculiar foods that become iconic representatives of their homelands. Ireland is no different. Some require cooking, like Shepherd’s Pie. Others are packaged and can travel, whether in a school lunch bag or a visitor’s luggage. But they can be difficult to find beyond the duty free shop.

Thankfully, for anyone hankering for a taste of the Auld Sod, there is Amazon, which delivers these portable comfort foods to your door. The products on our list are perfect for St. Patrick’s Day (or month, as it is in New York) or an evening watching Waking Ned Devine.

Ballymaloe has been making its Original Sauce (also called Relish) for over 30 years, using the original recipe of tomatoes, sultanas and a carefully selected blend of spices.  Not quite a sauce, not quite a relish, it’s great for cheeses, cold meats, French fries, deep fried fish, burgers, pork, sausage, and salads.

Ballymaloe is one of the world’s foremost cooking schools, located in the rolling green countryside of East Cork, Ireland.  Buy Ballymaloe Original Sauce on Amazon

Nothing is more inviting than warm scones, fresh from the oven. Serve them for breakfast, coffeetime, teatime, anytime spread with butter, preserves, lemon curd and, if desired, clotted or whipped cream. Garvey’s organic scones are made quickly and easily, so they can be on your table in no time. Buy Garvey’s Organic Traditional Scone Mix on Amazon

Among its many products Irish honey producer Mileeven offers this medium flavor, wildflower honey infused with a hint of Jameson Irish Whiskey. It will enliven your porridge and toast (and your morning), or use it to make a hot toddy.

Mileeven’s Irish Honey is 100% pure and raw and is not mixed or blended with any other honeys. From native Irish bees feeding on spring and summer blossoms, its Irish Honey comes from the sunny South East of Ireland.

Begun as a backyard hobby with two hives and run from the kitchen, today Mileeven is one of the leading honey companies in Ireland. Buy Mileeven Honey with Jameson Irish Whiskey on Amazon

Tayto Crisps are a cultural phenomenon throughout much of the Republic of Ireland.  The first two seasoned crisps (potato chips) produced were Cheese & Onion and Salt & Vinegar. Tayto was the original crisp manufacturer and the inventor of the flavored crisp and eventually went on to produce many other flavors, including Smokey Bacon, Mature Irish Cheddar Cheese and Spring Onion, and Prawn Cocktail. But Tayto Cheese & Onion crisps reign as the favorite in poll after poll.

O’Neill is a name almost as legendary as Ireland itself, a prevalent clan in a rich and varied Gaelic History. O’Neills shortbread is based on an age-old recipe passed down by generations and contains the simplest yet finest ingredients, blended and baked to perfection. Enjoy them with a relaxing cup of your favorite Irish tea. Share with unexpected guests if you must. Our favorite quote from an Amazon reviewer: “I bought these cookies for St. Patrick’s Day. They are gone because they taste so good.” Buy O’Neills Shamrock Shortbread on Amazon.

When most of us (outside of Ireland) think of Irish soda bread, the currant or raisin studded loaf that appears in March comes to mind. But in Ireland its “deeper, darker sister” is what you will find on your breakfast table, with soup, and accompanying your smoked salmon platter. it’s easy to make. But for first-timers there’s Garvey’s.

Garvey’s award-winning delicious and nutritious Irish Brown Bread mix is sugar and yeast free and has no trans fat or preservatives. All you need to add is buttermilk to enjoy this hearty bread. Serve with soup, salad, sandwiches, hors d’oeuvres, or for a great bread and butter snack with your favorite cuppa. Buy Garvey’s Irish Brown Bread mix on Amazon.

Flavahan’s has been milling locally-grown oats in Co Waterford for over 200 years. The high-quality oats used by Flahavan’s are grown within a 60-mile radius of the Flanavan home.  Irish steel cut oats are heartier than the rolled oats with which most Americans are familiar.  They produce a wholesome and heartwarming oatmeal, naturally rich in texture, with a toasted aroma and deliciously creamy taste that is naturally Irish.

Steel cut oats take roughly thirty minutes to cook, but if you set them up the night before you’ll have hot oatmeal in the morning almost instantly. Buy Flavahan’s Irish Steel Cut Oats on Amazon.

Mileeven, the esteemed honey producer, expanded into producing jams and preserves with unique Irish flavors. Their raspberry and poitin jam blends the finest of plump local raspberries with triple distilled Poitin–a traditional Irish distilled liquor. (Poitin is also the name of the legendary and illegal moonshine made in stills throughout Ireland’s nether regions.) The preserves are delicious spread on some Irish brown bread at breakfast or tea time. Buy Mileeven Raspberry & Poitin Preserves on Amazon. 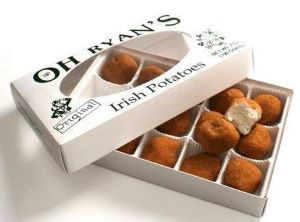 Oh Ryan’s Original Irish Potatoes aren’t potatoes at all. They’re a seasonal (January through March) confection featuring a coconut cream center covered in delicious, rich cinnamon. Cinnamon potatoes are well known in eastern cities of the U.S. where Irish neighborhoods celebrated the feast of St. Patrick. In remembrance of the great potato famine, these sweet candies are shaped like potatoes. But (shhhh) they are made in Pennsylvania. Still, they make a good St. Patrick’s Day treat. Buy Oh Ryan’s Irish Potatoes on Amazon.

As an affiliate of Amazon retailers, Blue Hare makes a commission on qualifying purchases made through the links on this page.