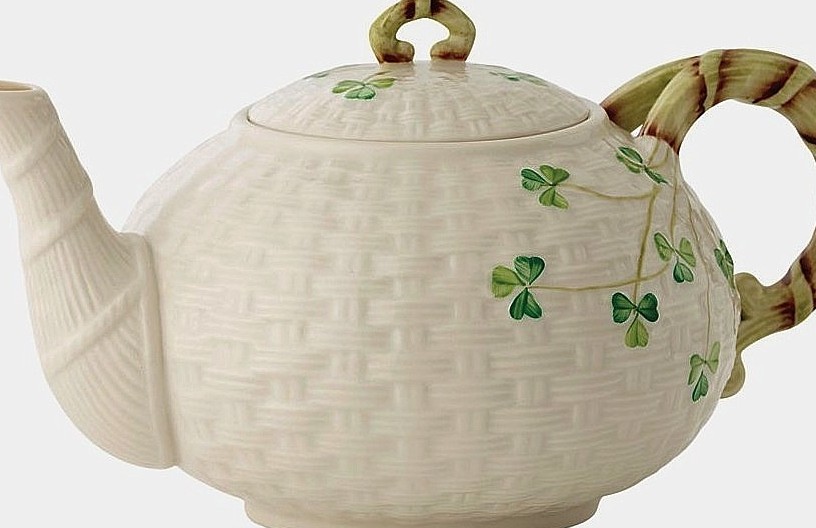 “Ah go on, you’ll have a cuppa”—words uttered in countless ways and countless times a day when people meet in Ireland. Cuppa meaning tea, of course. A cuppa is offered when a visitor arrives, for shock, for joy, for starting the day, for taking a break. And, for scandalous young Victorian women, in their rooms after a ball. It’s the Irish way with tea.

Until recently the Irish were the heaviest tea drinkers per capita in the world. (Now Ireland ranks second, behind Turkey). They average four to six cups of tea per day: that is 4.83 lbs. or 2.19 kg per year. That is about 772 teabags per person.

In some ways, Irish tea habits mirror those of next door U.K., with afternoon tea and high tea and tea at other times. But while the British refrain is “I’ll put the kettle on,” in Ireland you are entreated with “Won’t you have a cuppa?” It is an indication of the social aspect of tea-taking that reflects the Irish culture overall.
———————

So when is all of that tea consumed?

Here is a typical schedule of tea-taking in Ireland (although this has modified as Ireland modernized over the years).

Tearooms dot the countryside and populate towns and cities. Most are a low-key affair, offering a respite from touring or shopping or any activity that takes you away from home during the day. Tea, always served in a teapot, and cakes, scones, soup, and sandwiches are the usual fare.

And even in pubs.

All Irish bars are legally required to offer tea on their menus. Stated another way, it is officially against the law to own a bar and not serve tea. Also, in Alaska it is against the law for anyone to serve alcohol to a moose. But we digress.

The evolution of Irish tea culture

For the lower classes tea became both sustenance and a sign of hospitality. At one point, women in the poorest classes were accused of overindulging, leading to neglect of wifely duties, family breakdown, and ill health (Canadian Journal of Irish Studies, “This pernicious tea drinking habit”: Women, Tea, and Respectability in Nineteenth-Century Ireland).

The British (and their Anglo-Irish peers) would use the highest quality tea, sending lower quality tea to Ireland. To compensate for the poor tasting tea, the Irish would nearly fill the cup with milk. Because the milk dilutes the strength of the tea, the Irish began the tradition of making their tea much stronger than the British, a tradition that still exists today.

Milk in first and other rules of Irish tea

There is a very specific etiquette for tea drinking in Ireland.

Putting milk into the cup first…

…rather than tea followed by the milk, has been marked as a class distinction, but it is the Irish way (yes, we know there are Irish citizens who do the reverse…). There are several theories as to why this habit developed.

Back in the day the china owned by the masses was an inferior quality to that of the aristocrats and gentility. The cups would break when hot tea was poured, so putting milk in the cup before pouring saved the family dinnerware.

Another theory is that the milk in your Irish house, if not the freshest, would curdle when hot tea was added. Scalding the milk first would tip off whether the milk was on the turn; adding tea to the milk allowed the tea to cool slightly and avoid curdling, as well as separating the fat into unpleasant little globules.

In 2014, a science professor at the Institute of Studies in County Tyrone caused outrage by claiming that putting milk into the cup before the tea makes it taste better. (And, controversially, that those individuals who put it in first are more likely to be much cleverer than those who don’t.)

Today an individual’s socio-economic history may be exposed simply be which order milk is added to the cup. (We say, choose your friends wisely.)

The British East India Company held a monopoly on producing tea in Assam and exporting it to Ireland in the 1830s, first introduced to the upper classes around 1830, but by the middle of the 19th century tea became affordable for all to enjoy.

Samuel Bewley and his son Charles broke that monopoly by importing 2,000 chests of tea directly from China, thus breaking the East India Company’s monopoly. Bewley’s, based in Dublin, is still a popular brand today.

The Irish love a good argument debate, and “the best” tea is no exception.

The two brands in question are Lyons, established in Dublin in 1902, and Barry’s, established in Cork in 1901. Allegiances are strong. One Cork councilmember was ridiculed out of chambers for bringing Lyons tea to the meeting. Scouts honor.

What is the difference? Ask George Hirsch, chef and TV host, who learned much about it while filming in Ireland.

Barry’s: “Barry’s tea has a long established reputation and heritage as Ireland’s leading tea blenders. Barry’s teas are selected from the best tea estates in the world, ensuring that you enjoy the perfect cup every time. The teas are sourced from the Assam Valley of India, Kenya and Rwanda, guaranteeing the distinctive Barry’s taste that the Irish have grown to know and love.”

Lyons: “One of Ireland’s biggest brands, Lyon’s Tea is a completely natural product with no additives. These teas are bagged in pyramid style bags, giving the tea leaves more room to infuse, and delivering you a better cup. An ethically sound brand.”

Until recently Lyons was the undisputed leading tea in Ireland. But in a 2016 Checkout Top 100 Brands survey Barry’s bested Lyons for the first time.

But loyalties remain strong, and the fallout from offering the wrong tea to a guest can be swift and damning.

Tea was falling out of favor among the younger generation until recently. Now new brands are coming to market to appeal to the revival of interest.

Mrs Doyle’s Tea (named for the character from the TV series Father Ted) is one of the newcomers to the Irish market aimed at young, busy professional women. Mrs Doyle’s teas appeal to various times of day and various moods, with imaginative names like Chill Out Tea, Detox Green Tea, Ultimate Energy Tea, and Happy Tea.

Trendy tea rooms like Queen of Tarts in Dublin and Cupán Tae in Galway are serving up their own proprietary blends and innovative menus featuring locally-sourced products, updating the tea-taking tradition in a way that appeals to a younger crowd.

The Victorian Afternoon Tea has made a resurgence.

Trendy Dublin hotels jumped on board, turning the once staid event into marvels of creation.

Until it was temporarily closed due to Covid-19, the 5-star Merrion Hotel hosted an “Art Tea,” for which its pastry chef creates miniature sweet creations inspired by the hotel’s private collection of 19th- and 20th-century art.

The 4-star Morrison Hotel is a cool and trendy venue with an uber chic look and feel. The hotel offers several teas, including Vegan and Wheat Free teas. Our favorites are the Fancy Pants Afternoon Tea, with its sandwiches featuring artisanal Irish products,  and the Gentleman’s Afternoon Tea, which swaps finger sandwiches for manly fare that can be washed down with beer.

The ceremonial Afternoon Tea can be found in fine hotels all around Ireland. Sometimes rather pricey, Afternoon Tea is a guilty pleasure to be enjoyed now and then, with the best company.

The BLUE HARE home page has more great articles for fascinating women like you.