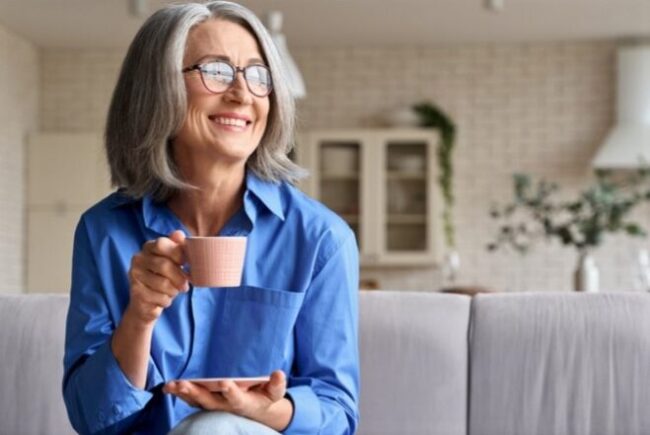 Tea is the world’s most popular beverage after water. Coffee runs a distant third. And yet it has not caught on in the United States as it has elsewhere. What are Americans missing? Especially when women over 60 get some very good health benefits from black tea.

Black tea is the most popular of the tea varieties globally

It might be news to Americans but around the world black tea is the most popular of the tea varieties.

It accounts for more than 90 percent of all tea consumed in the west and 78 percent of tea globally. Not only does it provide comfort and energy, it also has many health benefits.

If a cuppa is not yet part of your daily routine, read on. As our research shows, it’s time to take a fresh look at black tea.

Many classes of tea, same plant

There are six classes of tea–green, yellow, white, oolong, black, and pu-erh (fermented tea). They all come from the same Camellia sinensis plant, a shrub native to China and India.

Each class of tea is manufactured according to a precise sequence of steps. These include oxidation, stopping the oxidation, forming the tea, and drying it.

Black tea goes through the most rigorous oxidation—exposure to air. This produces the rust red color of black tea. Leaves go through further processing, first dried, then hand-rolled and crushed, followed by sun-drying and more processing. This process releases beneficial properties like free amino acids and gives the tea its distinct flavor and appearance.

While green tea has been anointed the “healthy” tea in recent years, black tea shares many of the same benefits. In fact, depending on leaf variety, steeping time, and water temperature, the benefits of drinking black tea may even be greater.

The 10 ways your health can benefit from black tea

The relatively modest presence of caffeine in tea offers a gentle, sustained energy boost. There are 70 mg of caffeine in a cup of black tea compared to 200 mg for coffee. Tea enhances blood flow to the brain without over-stimulating the heart. It also stimulates our metabolism and respiratory system. This ‘clean’ burst of energy comes from a mix of theophylline, theobromine, and caffeine.

Black tea helps us relax when we’re stressed or unwinding after a hectic day. We can thank the amino acid L-theanine for that feeling of being more relaxed and able to concentrate better. Studies show that black tea also reduces levels of the stress hormone cortisol when we drink it regularly in moderate amounts.

Consider this: researchers from Brigham and Women’s Hospital and Harvard Medical School in Boston and the University of New Hampshire, Durham, wanted to see if the alkylamine antigens naturally found in tea boost the body’s immune system. They asked volunteers to drink either five small cups of black tea or coffee daily for up to four weeks. After only two weeks, gamma-delta T cells from tea drinkers could produce more disease-fighting chemicals, while those of coffee drinkers did not.

Black tea contains polyphenols–antioxidants that help block DNA damage from tobacco and other toxic chemicals. They include catechins, theaflavins, tannins, and flavonoids and can help prevent certain types of cancers. Whether it’s green or black, tea has about eight to 10 times the polyphenols found in fruits and vegetables.

The polyphenols in black tea inhibit both plaque formation and bacteria growth that promotes cavities and tooth decay. Black tea also reduces the stickiness of bacteria that accumulates in dental plaque, which produces acid and ultimately dissolves tooth enamel and causes cavities.

In 2009, a meta-study of data from nine studies–involving 4378 strokes among 194,965 individuals–showed heart healthy findings. Those who drank at least three cups of tea daily had a 21 percent lower risk of stroke than those who drank less than one cup. Another study found that black tea helped lower total triglyceride levels by about 36 percent in three months. This same study also found a greater than 400 percent increase in the antioxidant concentration of participants’ blood. Higher antioxidant levels are linked to less inflammation and oxidative stress.

Tea contains theaflavins, catechins, quercetin and other polyphenols recognized for their anti-cancer properties. Drinking tea is linked to reduced risks of squamous cell carcinoma of the skin, head and neck cancers, and adult leukemia. It is also linked to reduced risks for gastric, endometrial, colorectal, and prostate cancers.

Women who consume the most flavonoids, a key antioxidant in tea, are significantly less likely to develop endothelial ovarian cancer—the fifth leading cause of cancer death among women. To reach this conclusion, researchers studied the dietary habits of more than 170,000 women for three decades. They concluded that just two cups of black tea every day was associated with a 31 percent reduction in risk for this cancer.

In countries where black tea is consumed, rates of type 2 diabetes are lower.

In 2009, researcher Ariel Beresniak of Data Mining International in Geneva and his colleagues looked at black tea consumption in 50 countries. They compared tea consumption with rates of diabetes and cancer, and to respiratory, infectious, and cardiovascular diseases in each country.

Statistical analyses showed that diabetes rates were low in countries where people drank the greatest amount of tea. Countries like Ireland and the U.K. Black tea contains complex flavonoids associated with several potential health benefits. The brewing process releases these flavonoids. While the study found a mathematical association between black tea consumption and type 2 diabetes rates, it did not prove causality.

Regular tea drinkers may have stronger bones and a lower likelihood of developing arthritis. Thank the phytochemicals in tea. According to one study conducted by a team of researchers in Western Australia and published in The American Journal of Clinical Nutrition, elderly women who drank tea had higher bone density in their hips and less bone loss over time than women who didn’t drink tea. This was consistent with earlier studies suggesting tea drinking may protect against bone loss and osteoporosis.

In the study, Australian researchers surveyed 275 women between 70 and 85—participants in a larger five-year study of calcium supplements and osteoporosis—about how much black and green tea they drank. Bone density measurements of their hips were taken at the beginning and end of the study.

The results showed that the regular tea drinkers had higher bone density in two sites in the hip compared with non-tea drinkers.

Making the best cup of tea

The “best” cup of tea may depend on what you are aiming for. Do you want to maximize the biochemicals in your tea or make a brew that is pleasing to the palate? Because the chemical components of different varieties can vary widely, tea aficionados recommend focusing on enjoying the distinct flavor profile of the tea.

With or without milk

Fine premium teas are like fine wines. They should be enjoyed with no additions to allow the distinct scents and flavors to emerge. Many tea drinkers in the U.K. and Ireland drink milk in their tea. There have been reports that adding milk to tea can negate the health benefits. A 2007 study published in the European Heart Journal found that the casein in milk blocked the ability of the flavanols in tea to relax and expand to keep blood pressure healthy. The study was small (16 people) so clearly not definitive.

British health experts doubt that adding some milk to tea would negate all the health benefits tea offers. After all, they note, there are “about 200 bioactive compounds in tea” and the effect of milk vasodilation “does not necessarily mean milk negates the other effects of tea.”

Catherine Collins, a dietician and spokesperson for the British Dietetic Society, points out that drinking tea with milk would boost calcium intake. She added, “There are benefits for tea, with or without milk, so keep on drinking.”

Go to the Blue Hare home page for more articles for fabulous women.

As an Amazon Associate we earn a commission from qualifying purchases made through links on this page.