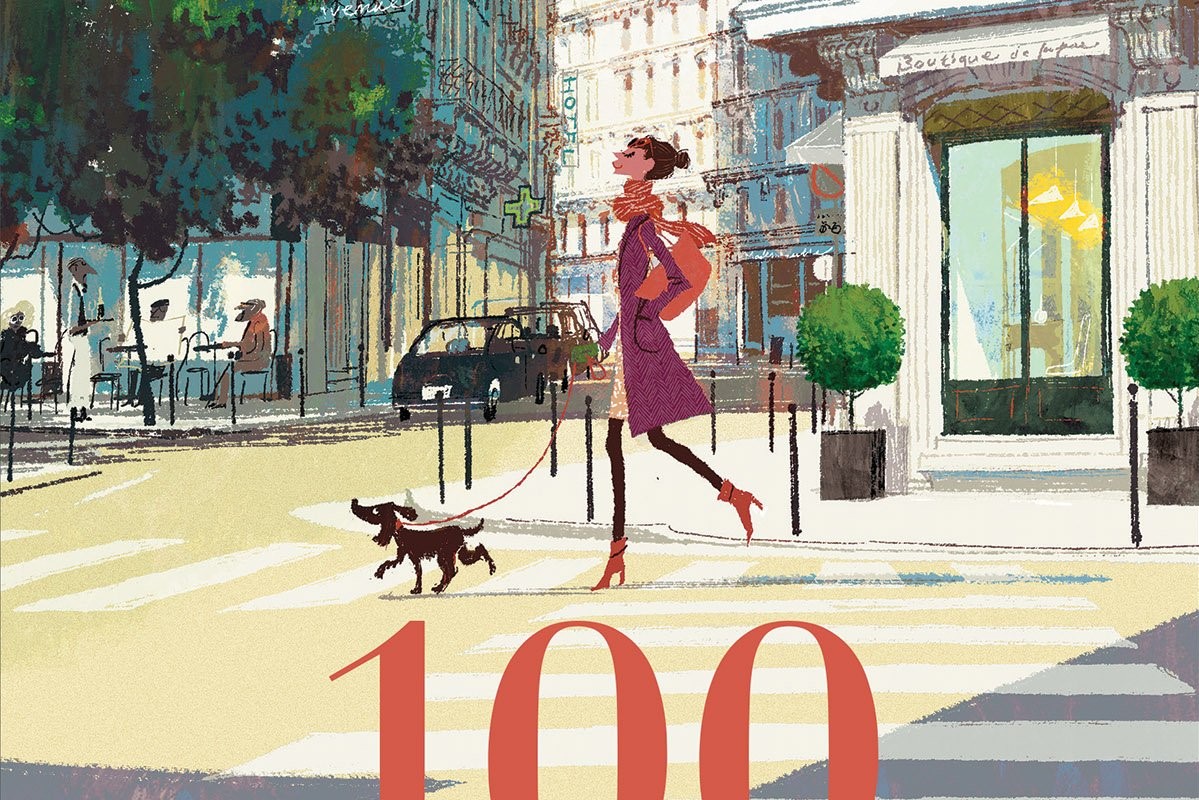 If you read only one book this summer let it be 100 Places in France Every Woman Should Go by Marcia DeSanctis.  No, it’s not a bodice-ripper beach book. Nor is it a typical travel guide of the Fodor’s/Let’s Go Europe variety.

There are no, or very few, hotel recommendations, Metro stops, bus routes, or restaurant reviews. 100 Places in France is like an exquisite box of chocolates, with a cornucopia of truffles, nutmeats, caramels, and creams. Eat one and savor the experience. So too with this book.

Marcia DeSanctis is an award-winning journalist and travel writer who spent several years living and working in France. She has done what too few visitors to France do—she got out of Paris and explored the bounty of natural and manmade beauty that is found in the French countryside, in its mountains, and along its many beaches.

In each of the 100 essays that comprise the book, she writes in almost poetic language, painting scenes for us in words.

This excerpt is from the first story, when she had first moved to Paris.

“It was a Winesap-crisp Sunday morning, and I recall the dainty rustle of chestnut trees when I unclasped and threw open the window onto a Paris street for the first time. I was alone; my then-boyfriend (no husband) would be arriving in November. Someone in the building was playing a cello—or maybe it was a recording—and the notes drifted into my new living room. Through a friend’s aunt’s cousin’s brother-in-law or some such, we had secured a one-bedroom sixth-floor rental apartment in a cushy building in the 16th arrondissement.

“I hadn’t yet discovered the buzzy street life on nearby rue de l’Annonciation, or the Marché Couvert de Passy that was right around the corner and is still one of my favorite food markets in Paris. As far as I could tell, everything was closed. I was starving and thirsty, desperate for a liter of Badoit and a two-pack of yogurt or a couple of apples so I could have a nibble and a nap. So I stopped an elderly madame in the foyer, as stately as her neighborhood of mansions and old money dictated, and asked where I could chercher à manger.

“The Stella on Avenue Victor Hugo is open and very good, and afterwards of course it’s a lovely day for the Jardins de Bagatelle.” So much for a chilly Parisian welcome. “It’s where we like to go on Sundays.”

After showing us some of her favorite haunts in the city of light, DeSanctis departs for parts hither and yon. In Chapter 27, Detox and Retox: Les Sources de Caudalie and Chateau Smooth Haut Lafitte, Martillac, she explores a luxurious spa near Bordeaux that created vinothérapie, treatments that use the depleted skins and seeds of grapes discarded after the wine pressing process.

“There are countless luxury hotels in France, so many places with 1,000-thread cotton sheets on which to bask and swish your vacationing body (some, like the Grand Hotel du Cap-Ferrat actually have a bar to select the qualities you desire in a pillow and voila! – one will appear at your door). And many of them build spas of such grandeur that well-being hardly seems worth pursuing anymore without four-foot orchids in the bathroom and indoor infinity pools. Sometimes, you have to wonder how high the bar can go.

What distinguishes the Vinotherapie Spa at Les Sources de Caudalie in Martillac, however, is the concept itself—something that could only have taken root twenty minutes from the city of Bordeaux in the heart of Aquitaine’s wine country. …”

New desires emerge, she notes, “to stroll upon the vineyard’s soil and stones, to feel the thick flow of red wine down the throat. To sell an app to Google or another high-tech giant and never have to leave this place.”

From sea-level Aquitaine swing across the country to the French Alps. In chapter 37 DeSanctis opens the lid on Annecy, a jewel-box of a town that sits on a turquoise-hued lake nestled in the Haut-Savoie.

“The town itself dates to the 10th century and is a network of pristine canals that flow past narrow streets of low-slung weathered stone buildings blessed with the charm (and archways and huddled doorways) that Epcot and Ye Olde American diners try so valiantly to ape. It is because of this latticework of rivulets and footbridges that Annecy is known as the French Venice.” 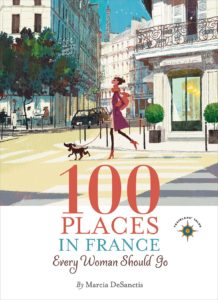 Each of the 100 essays is similarly evocative, whether the subject is walking by “half-timbered houses with bright Crayola shutters” along the Alsatian Route des Vins (chapter 84), or examining the 13,000-plus needles of a silk-weaving Jacquard loom in Lyon (chapter 52), or finding perfect lingerie in Paris (chapter 7). Each as delicious and individually flavored as a box of macarons.

Whether your summer reading list includes The Mueller Report or the latest Daniel Silva thriller, tuck 100 Places in France in your bag to savor in a quiet moment, under a leafy tree, perhaps with a chilled rosé. Or place it by your bed to inspire the most beautiful dreams you’ll have as an adult. Find it on Amazon.

Don’t stop with France. The 100 Places Every Woman series also includes books on Cuba, Greece, Italy, Spain, and the USA by different authors.

As an Amazon affiliate Blue Hare makes a small commission on purchases made through links on this page. It helps us keep the lights on. Thank you for supporting Blue Hare.