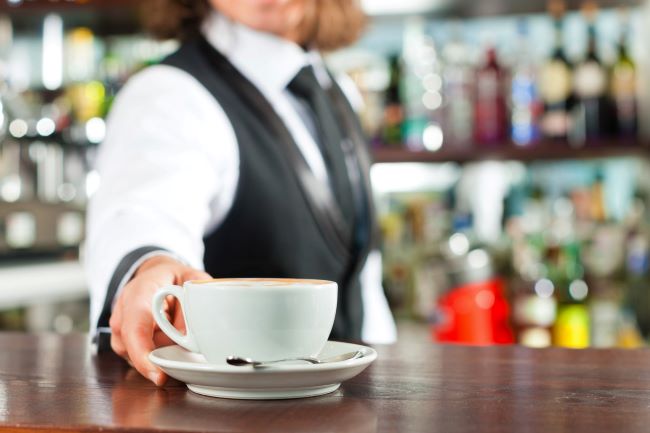 Mastering coffee culture in Italy can be a bit daunting. There are more unspoken rules than, let’s say, strolling into your local coffee bar and ordering a part-skim double-shot grande latte. And as cosmopolitan women over 60, we certainly want to appear familiar with the cultural practices of our host country when we travel. So what should we know?

Few nationalities place as much importance on the quality of their daily coffee as the Italians do. Because it is so central to their day–breakfast, mid-morning, after lunch, mid-afternoon, after dinner–it must be perfeto.

What is it that makes its coffee so enjoyable?

Italian coffee bars almost exclusively use high quality Arabica beans from Brazil. In the south, where a stronger flavor is preferred, the highest quality raw robusta beans from Vietnam are used.

Unlike French roast coffees, which are dark and lean towards bitter, Italian roast coffee is a rich brown color. A darker roast does not always mean a better espresso. Master roasters treat each batch according to the beans being used, keeping a careful eye on the beans since they can burn in a New York minute. The beans are cooled before being ground for brewing. That’s why coffee in Italy is so flavorful and rich, but not harsh.

It was in Italy that the first espresso machine was developed in 1884 by Angelo Moriondo of Turin. The Moka pot is another Italian contribution to coffee making, invented in 1933 by Alfonso Bialetti, also of Turin.

Then there is the lesser known Napoletana, cuccumella in the local dialect, which relies on the force of gravity (the pot is turned upside down) rather than steam that pushes water through the Moka pot. Many believe the Napoletana makes the best coffee in the world.

A special note for those who frequent a certain coffee chain: if you order a latte in Italy, you’ll get a cup of warm milk. Assuming that’s not what you want, you should know that there is an art to selecting the right cup of coffee. What you order even depends upon the time of day and the circumstances. The Italians have developed subtle rules and practices that shape their coffee habit.

Want a coffee? Find a bar.

Bars are everywhere in Italy and open early so you can get your breakfast coffee there. But you might want to stand and drink your coffee at the counter rather than sit at a table. You can expect to pay at least double for your coffee at the table because you’ll require servizio.

If there’s milk in your coffee, it must be morning

Any drink that contains milk or dairy—think cappuccinos and caffè–are coffees to enjoy in the morning. You will not want to order after them after 11:00 a.m. and never with a meal. Italians believe that dairy upsets digestion. Milk-based drinks tend to be served lukewarm, not hot.

Coffee is considered a digestive so it’s common to follow dinner with a cup. It’s always caffè–espresso–often with spirits added. Or you can skip coffee altogether and enjoy a digestive drink such as limoncello or grappa. But never a cappucino, or even macchiato. Save those for morning.

Coffee is served in elegant, medium sized cups with saucers. The only place you’ll get a grande or a venti is in that Starbucks in Milan we told you about. If you want more coffee than the cup will hold, you can always order another one.

You pay at the counter

Most people don’t get a table just for coffee; they stand at the bar. Tips aren’t expected but you can leave a small amount of change on the counter.

Deciding on the right cup of coffee for you

Espresso is the standard coffee you’ll find everywhere. It’s served black and in single shots. You order an espresso not by asking for espresso but for “uno caffè (ka-fay), per favore.” And if you order “uno caffè,” expect an espresso, not your regular American brew. Sugar is almost always added to an espresso.

If you need a double espresso to get your engine running you can order a doppio, or do as locals do: they order a second shot if they need more caffeine. No need to wave your tourist flag first thing in the morning.

The classic Italian espresso drink, a cappuccino is equal parts espresso, milk foam and steamed milk. It is a morning drink, most commonly enjoyed as part of a light breakfast (colazione) with a pastry typical of the region you’re in–cornetto, brioche, sfogliatella. Faux pas alert: Don’t order cappucino after 11:00 a.m. unless you want to wave that tourist flag again.

A bit creamier than a cappuccino, a caffè latte is one-part espresso to two parts steamed milk, topped with a bit of foamed milk. Remember to specify ‘caffè’, as ‘latte’ alone means ‘milk’. It’s not uncommon for tourists to order a ‘latte’ and be surprised when they’re served a steaming cup of milk.

If you miss your filter coffee, try an Americano. It is an espresso diluted with hot water to give it a profile similar to traditional brewed coffee (the style of American coffee), but the flavor varies with the number of shots of espresso and amount of water added.

This ‘long coffee’ is somewhere between a caffè (espresso) and an Americano.  Espresso is made with a smaller amount of water, resulting in an intense flavor.  Lungos are made with about twice as much water, so they’re larger than espresso shots.  A regular shot has about one ounce of espresso and a lungo shot makes two ounces.

While a Lungo is an espresso made with more water, a Caffè Ristretto is just the opposite. Made with the a finer grind of espresso with half the water,  it’s a more concentrated beverage with a different balance of compounds than in standard espresso, and less bitter.

In Italian, macchiato means “stained” or “spotted”, so the literal translation of caffè macchiato is coffee “marked” with a dash of hot, foamed milk on top. Unlike other milky espresso drinks, the macchiato can be enjoyed at breakfast, mid-moring, or as an afternoon pick-me up. But not after dinner.

A latte macchiato is the reverse of a regular macchiato: a large glass of frothed milk “stained” with a shot of espresso poured on top.

According to those who know these things, Naples is the birthplace of Italian caffè culture. Caffè Napoletano is a very strong coffee since is made with a blend of Robusta and Arabica beans.    which presents an amazing foam on top that should be mixed with a spoon before drinking it.

Very simply “espresso with cream”, caffè con panna is a shot of espresso topped with sweet whipped cream. Decribed as “a blissfully synergistic combination of ingredients“,  the coffee’s bitterness is a perfect counterpoint to the sweetner of the cream’.

Corretto means “corrected,” and here it means espresso spiked with  served with a splash of liquor, usually cognac, grappa, or Sambuca. (It’s also known as the Italian builder’s early morning pick-me-up.) A caffè corretto can be a rejuvenating afternoon drink when you’ve been out sightseeing all day. It It’s also common to have a Corretto after dinner. It is believed to aid digestion.

When it’s hot outside: chilled coffees

A Shakerado is espresso in a shaker. Coffee is mixed with sugar syrup and ice, then shaken vigorously until frothy. It’s usually served in a chilled martini glass, topped with some of the coffee foam. Contrary to what you might think, the shakerato is much more than a simple iced coffee. The spirited shaking releases coffee oils and transforms the ingredients into a refreshing entity of its own.

Caffè Freddo means hot espresso poured over ice. It does not mean a glass full of ice with some coffee added. To make a good caffè freddo, you must pour the freshly brewed coffee directly over the ice, before the oils have a chance to develop rancid aromas. In homes, a a bottle caffè freddo is often found in the refrigerator. Hot espresso is poured into a container and immediately refrigerated. Because when it’s hot, it’s good to have some on hand.

Similar to a shakerado, l’espressino freddo (sometimes called shakerado) is made by combining long shots of espresso with sugar and ice cubes then shaking until cold. Half of the cold coffee is poured into a glass. The remainder is mixed with whipped cream, which is then spooned over the coffee.  Also delicious to make at home.

A chilled version of a Caffè Macchiato. Fresh-made espresso is combined in a blender with milk in a 3:1 ration and sweetener to taste. Add ice cubes and blend until smooth.

The reverse proportions of a Caffè Macchiato Freddo. Espresso and milk are combined in a blenderin a 1:3 ratio. Sweetener and ice are added and the whole is blended until smooth.

The over-the-top coffee drinks so popular in the United States are frowned upon in Italy. In fact, the Italians typically look down on coffee drinks with added spice or flavorings. There are, however, three noteworthy exceptions—caffé all nocciola, a frothy espresso with hazelnut cream from Naples, a marrocchino, a cappuccino with cocoa powder from Milan, and a coretto, an espresso with alcohol, usually grappa.

If you are a lifelong coffee lover, you will appreciate the many forms of true coffee you will find in Italy. In addition to those Italian towns on your bucket list, why not include savoring their unique coffees as well?