“You’ve had every age. Now you have this age, and it’s exciting.”

That is how Olivia de Haviland responded to an interview question by photographer Ellen Warner for her new book, The Second Half, Forty Women Reveal Life After Fifty. De Haviland is one of 40 women profiled in this beautiful book, some unique, some accomplished, some who lived more modest lives. None are ordinary.

When Warner was in her early 50s she found herself, like many of us, thinking about aging. She wanted to know what it feels like to be 70, 80, or one hundred. “How will I feel when I lose my looks?”, she reflected. “What is it like to know that the end of life is approaching?”

She began traveling the world to interview women over the age of 50 about their lives.  Her book explores, in stunning photographic portraits and intimate interviews, how the second half of life is experienced by the women she found, from many different cultures. 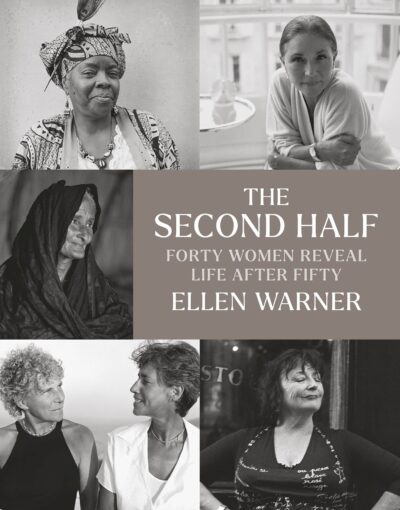 How do you sum up a woman’s life experience?

The women she photographed and interviewed had to meet two criteria: They had to be interesting looking, and they had to be willing to be open and honest in the interview.

Initially her interviews were fairly structured, with a list of questions common to each woman.

Soon she realized she wanted to know more. What kind of family were they born into? What had their childhood been like? So she started asking the women to tell her their life stories.

That resulted in a great deal of editing. But she also learned something from each of them, and not just eschatologically. How to run a pub in London, for example. How to shoe racehorses. How marriages are arranged.

The women could not be more different. Jean Angell (1944-2021) was a Harvard-educated lawyer who lived with ALS for the last 22 years of her life, learning to communicate only with eye movements.

Odette Walling (1921-2010) was a medaled French Resistance leader who spent the last years of the war in the Ravensbruck concentration camp. Unschooled Lali Al Balushi was divorced by her husband in Oman, who then took their three small children with him to Pakistan. 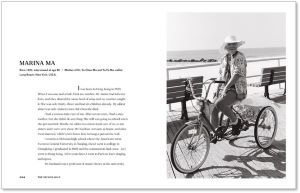 Yet from the nomad in the Sahara to the cook in South Carolina to the Marquesa in Seville they all agree: that the second half is better than the first.

“We need to celebrate women not for wrinkles but for laugh lines,” writes Erica Jong in the Foreword. “We need to see ourselves changing and growing. If that means looking older, celebrate it. Experience is as beautiful as youth.”

The Second Half might be mistaken for a coffee table book, but it is so much more. Especially for women like us, over 60 and exploring thr life we are living now. You will read a few interviews, set the book down, and reflect for a while. Another time you’ll do the same. Like truffles, each is a small bite that’s packed with flavor, to be savored.

Ellen Warner began her career as a photojournalist in 1969. Her photographs have been pub­lished in numerous newspapers and magazines and exhibited extensively. Over the years, she has developed a specialty of author portraits and has worked for most publishing houses in New York and London. She has also writ­ten travel articles, which have been published in the New York Times and Travel and Leisure in the U.S.A., and in The Traveller in the U.K.

Buy The Second Half on Amazon and give it to every woman you know and cherish who is over 50. It is the greatest kindness, a gift of companionship, inspiration, serenity.

As an Amazon affiliate Blue Hare receives a commission on purchases made through qualifying links on this page.