We are about to enter the centennial year of the United States’ entry into World War I—The Great War. More than nine million combatants and seven million civilians died, making it one of the deadliest conflicts in history.

The war began in Europe in the summer of 1914. There have been numerous high-profile commemorative events in Europe to mark the event. The United States only entered the war in 1917. As such, we can expect that ceremonial observances will escalate in the countdown to the 100th anniversary of the armistice on November 11, 2018.

The First World War ended the Austro-Hungarian, German, Ottoman, and Russian empires. It devastated Belgium and France, restructured Europe, the Middle East, and North Africa, and fed revolutions in Russia and Ireland, among others. Yet in the United States its story is considerably overshadowed by World War II, an involvement that in many ways sought to resolve issues left unresolved by the First World War. We are still feeling the effects of those decisions and agreements today, especially in the fractious Middle East. It makes sense for us to learn more about that confrontation a hundred years ago to appreciate its ongoing impact. 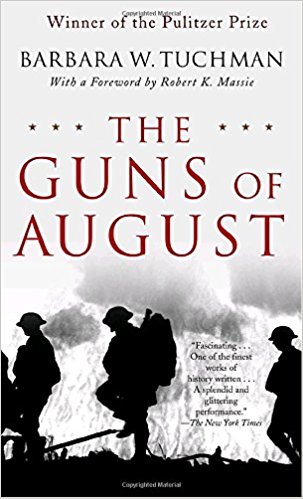 An excellent entry point to learning about The Great War is Barbara Tuchman’s Pulitzer Prize-winning The Guns of August (1962). It chronicles events in the month of August 1914 that led up to the full outbreak of war.

Packed with detail yet easy—and exciting—to read, the book’s publisher described it in this way:

This was the last gasp of the Gilded Age, of Kings and Kaisers and Czars, of pointed or plumed hats, colored uniforms, and all the pomp and romance that went along with war. How quickly it all changed, and how horrible it became. Tuchman is masterful at portraying this abrupt change from 19th to 20th Century. And how she manages to make the story utterly suspenseful, when we already know the outcome, is the mark of a great writer, and a classic volume of history.

Some of the author’s views have been disputed since the book’s publication. Nevertheless, it is the best, and most enticing, introduction to the subject for the interested lay person.

The Guns of August is our book selection for the month of August. It will leave you breathless.

Note: The poem In Flanders Fields, by Canadian John McCrae, 1915, was written in the aftermath of the Second Battle of Ypres in Belgium, when McCrae noticed that poppies were springing up among soldiers’ graves. Poppies have become the symbol of the war. In August 1914, the U.K. commemorated the centenary of World War One by turning the moat at the Tower of London red with a sea of ceramic poppies.  Photo source.