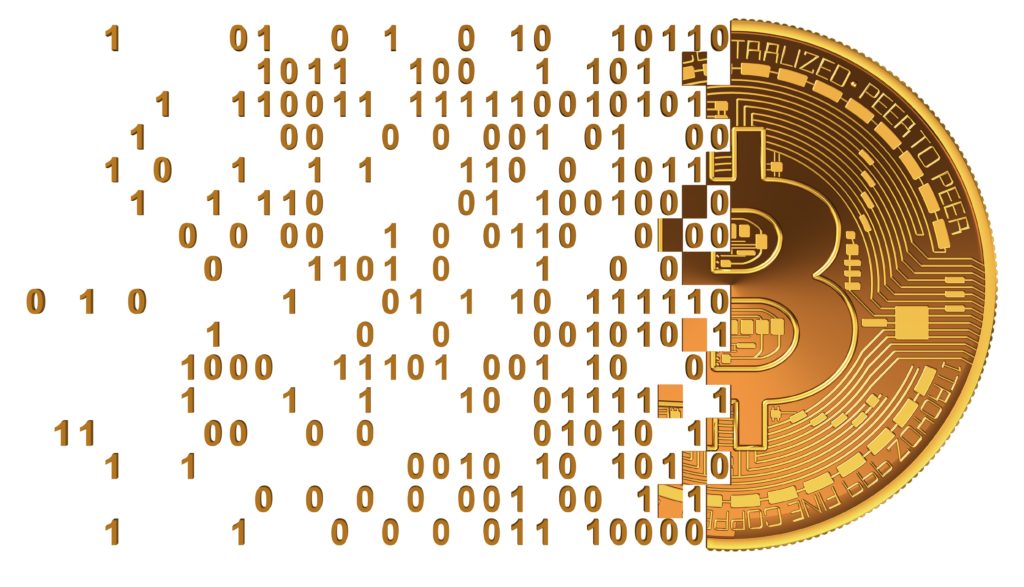 Bitcoin has been in the news lately, particularly in reports about computer hacks. But what is Bitcoin? And why should we care about it? Because before long, it could become part of your retirement portfolio.

Bitcoin, created in 2009, was the first decentralized cryptocurrency. A cryptocurrency is a digital asset—basically a digital currency–designed to work as a medium of exchange, like money.  Bitcoin now competes with a number of other cryptocurrencies.

Banking, the system of financial transactions most of us use to borrow money or pay bills, is highly regulated through a system of central banks around the world. On the other hand, cryptocurrencies like Bitcoin, Ethereum, and Ripple exist on a blockchain transaction database, a public ledger on the internet.  More about that later.

Why we need to understand Bitcoin, if only a little bit, is because cryptocurrency may find its way into our retirement funds. Their performance has been outpacing traditional funds, but they are highly volatile and risky.

Imagine an online spreadsheet or ledger that no one owns and anyone can access. New data is verified by private computers around the globe, while existing data can’t be altered. This ledger can validate and store almost anything of value – financial transactions, voting returns, health records, you name it.

The technology behind this type of distributed ledger is called blockchain. It’s poised to transform the global economy, which means it could have a big impact on your investments.

Blockchain technology was originally devised for Bitcoin, which has been in the news as the payment of choice in ransomware attacks. Bitcoin was the first cryptocurrency, but now there are literally hundreds, which hit a total value of $150 billion in August, 2017. While Bitcoin launched the blockchain revolution, the ability to transfer money and information to anyone in the world without a middleman is a game-changer that goes well beyond Bitcoin’s shady past. Blockchains will likely be used to securely record, store, and transfer data in many industries.

Do you remember the moment when you first understood what the internet was?  The term was coined in 1974, but it wasn’t until 1995 that Amazon, Yahoo, EBay, and the Internet Explorer web browser were launched. Google showed up three years later; a couple of Harvard students launched Facebook in 2004. If someone had tried to tell you in 1974 that one day you would spend the bulk of your day in an online world, often using a computer in your phone, your brain might have exploded. It just wasn’t possible to explain the potential of the internet—we had to see it for ourselves.

Blockchain is also a little hard to wrap your head around, but it’s worth the effort.  It’s being called internet 2.0 and the next great disrupter. Blockchain may not be part of your life today, but in a decade, the technology may be just as much a part of your daily life as your smart phone is today.

How does blockchain work?

Our current financial system is based on a lack of trust. Banks and other financial institutions act as intermediaries to ensure that when you write someone a check, the money comes out of your account as promised.

Blockchain changes all that by providing a way to record ownership and conduct transactions through a shared peer-to-peer network instead of a central authority, like a bank. This shared network consists of private computers known as nodes, which earn a small fee by “mining” or validating the transaction. Once the transaction is verified, it’s combined with other transactions to create a new block of data. Blocks of data are “chained” together so they are very difficult to modify later.

Blockchain creates proof of ownership by using unique digital signatures that rely on both public decryption codes known to everyone on the network and private keys known only to the owner. The network verifies every transaction at regular intervals. Complex algorithms and consensus among users ensures that transaction data cannot be tampered with after it is verified, reducing the risk of fraud. Since each change to a blockchain is made across the whole network at the same time, changes cannot be undone.

That makes transferring data and assets more efficient, secure, and transparent. By storing blocks of data across a network of many computers, the information has no single point of failure and cannot be corrupted. And by cutting out the middleman, there can be enormous cost savings.

It might be helpful to think about blockchain technology this way:  A collaboration tool like Google documents allows a team of people to access one document at the same time, with the single version of the document always visible to everyone. Blockchain is a shared ledger that allows all parties to view transactions. This transparency eliminates the need for a middleman. 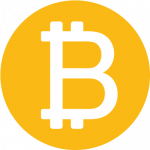 Bitcoin is a virtual, digital currency that exists as a series of transaction records kept in a Bitcoin “wallet.” It is decentralized and unregulated. Bitcoin’s value can fluctuate widely – at the beginning of 2017, one Bitcoin was worth just under $1,000 before rising to more than $6,000 in October 2017.

While Bitcoin was first used to buy pizza, it quickly became associated with illegal activities because transactions could be anonymous.

On May 22, 2010, Laszlo Hanyecz paid a fellow Bitcoin Talk forum user 10,000 BTC for two Papa John’s pizzas. Back then – when the technology was just over a year old – that equated to roughly $25, but is $5.12m by today’s exchange rate.  At Bitcoin’s all-time high last December, the pizzas would have been worth an eye-watering $11.47m, making them likely candidates for the most expensive pizzas of all time. Now widely recognised as the first real-world transaction with Bitcoin, May 22nd has come to be celebrated as ‘Bitcoin Pizza Day’, with cryptocurrency enthusiasts raising a slice to Hanyecz’s infamous hunger pangs that paved the way for early merchant adoption.   —Coindesk.com, May 22, 2014

Silk Road, an online marketplace for drugs and other illegal goods, used only Bitcoin. Silk Road was reportedly responsible for half of all Bitcoin transactions before being shut down in 2013. Its closure helped Bitcoin become more legitimate. Today, forensic tools have made it harder for criminals to get away with using Bitcoin.

By November 2013, Bitcoin was moving more money than Western Union, with legitimate business accepting it. In 2017, Japan recognized Bitcoin as a legal currency and trading in Asia exploded. Bitcoin is increasingly seen as the “new gold,” a hedge against global uncertainties.  This year, the price of Bitcoin climbed from below $1,000 to more than $6,000.

However, many prominent investors believe Bitcoin is a bubble and are concerned about fraud.

What about other cryptocurrencies? 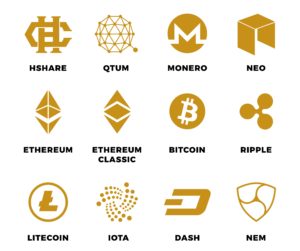 Each type of blockchain platform or network offers different features and benefits and comes with its own digital currency. As mentioned, there are now hundreds of cryptocurrencies. No doubt many will fail, but the current market leaders have some track records of success

Ethereum allows developers to build decentralized applications on top of its open source platform. It is viewed as having more potential for business than Bitcoin due to its ability to run smart contracts, which execute the terms of a contract automatically once conditions are met, without the need for human intervention.

The price of ethereum (also known as ether) rose 5,000% from the start of 2017 to June 12th, when it hit a high of $407. The price dropped quickly and has remained volatile. Ethereum’s popularity is due to a number of factors.  Fortune 500 corporations, including Microsoft, Toyota, and ING, joined the Enterprise Ethereum Alliance in 2017 to create a private, open-source version of Ethereum for businesses to track financial data and contracts.  Singapore’s government has conducted tests that could lead to a digital national currency using Ethereum technology and Russia has also shown interest.

Ripple XRP is a Google-backed startup which is used only by big institutions, primarily those in the banking industry. Ripple says its digital currency XRP allows for faster cross-border payments than any other method. This saves banks $3.76 for every payment.

Ripple has raised nearly $100 million and is setting standards for banks to follow. XRP is currently much cheaper than other cryptocurrencies, but some investors are concerned that it is majority-owned by a single company.

Litecoin was launched with the goal of being the “silver to Bitcoin’s gold,” but lagged behind other cryptocurrencies for much of 2017. Recently, there has been more interest and rising prices due to a technical upgrade and investment from China. Litecoin is considered easier to mine than other cryptocurrencies and can handle higher transaction volume than Bitcoin, giving merchants faster confirmation times.

Cryptocurrencies and blockchain are on the wild frontier of investments. There can be tremendous rewards, as well as very serious risks. You could see spectacular gains, or you could lose every cent.

Related: Investing in Bitcoin: what you need to know

This article is intended to provide an overview of cryptocurrency only. Consult a professional investment advisor to determine whether this is a good investment for you.